The story of the Beams 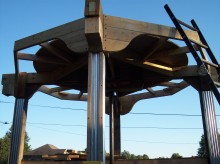 The main structural support for the Device is a set of four 10 foot tall wooden beams. These are not just pieces of wood we found, the beams have a history and a tell a story of generations of a family.

The corner beams were originally structural beams in a building in David’s grandfather’s local lumber store.
When David was a teenager, the buildings were torn down and the beams were saved for a future building project. David spent an entire weekend side by side with his grandfather, pulling nails from the beams by hand. Now, the beams have returned to David’s hands- spending many hours being transformed into the strength of the Infernal Device.

When a section of the outer railing is removed, there is a juncture point where the many lives of the beams come together. 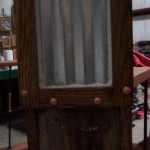 The rough, creosote beam still exposed in one small section, contrasting with the Tin cladding, lovingly formed oak trim and the many brass buttons that finish the look of the machine.

We know that if David’s grandfather were still with us, he would stand as we do.. in amazement, staring up at the re-born beams and into a universe of possibilities…. 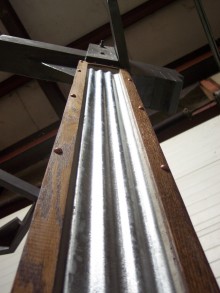